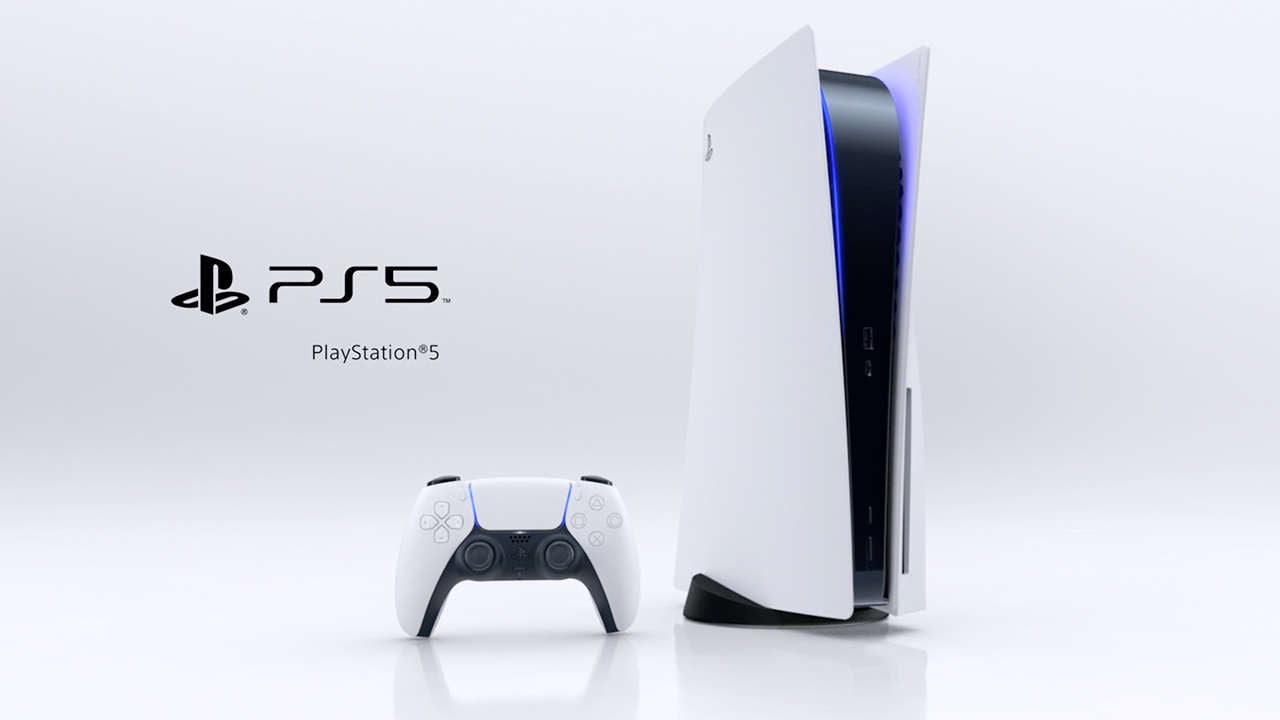 The PS5 is releasing in Holiday 2020, the specs, the games, and more

Sony has finally revealed the PS5. In a June 11 showcase event, we learned all about the PS5’s game library, but the conference culminated in a surprise reveal of the PS5 system itself. We now know that the system will be an black-and-white boxes with rounded angles and fins on the top. We also know that it will share a color scheme with the similarly black-and-white DualSense Controller.

Beyond that, all the information we know about the PS5’s specs are the same as before. It will still feature a custom 825 GB SSD that can load games incredibly quickly, as well as a 10.3 teraflop AMD RDNA 2 GPU for rendering vivid, lifelike graphics. Most games will run at 4K resolution with speeds of 60 frames per second, but the system can theoretically handle resolutions up to 8K and frame rates up to 120 fps.

We have not yet learned a price or release date for the PS5, although we’ve included all the information we know about those two topics later in this guide.

PS5 cheat sheet: What you need to know

Like its release date, the PS5’s price is shrouded in mystery. So far, all we have to go on is that the PS4 cost $400 when it first came out — a price that undercut the competing Xbox One by $100. Sony may not pull the same trick again, though, as Microsoft is in a better position to undercut its competitor this time around.

Another price listed at a retailer is CA$560 (a little less than $400 USD) at a store called Play N Trade Vancouver. This seems to be a placeholder number rather than an official price from Sony, but it could be in the right ballpark. Other reports suggest that the PS5 could cost up to $500, though.

Sony itself has promised that the console will be a “the best possible value proposition,” while acknowledging that value does not correlate directly to price. As such, we can expect the PS5 to be somewhat expensive. As before, $500 seems like a safe number; if it’s less than that, gamers may be pleasantly surprised. And if it’s more than that, at least Sony has tempered our expectations first.

Since the PS5 doesn’t yet have a price or a release date, it’s not possible to pre-order a console at the moment. However, that hasn’t stopped stores from offering stopgap solutions.

At Best Buy, Gamestop, Target and other retailers, you can sign up for notifications about PS5 availability. Think of it as a pre-pre-order. When the retailers start selling PS5s, you’ll get an e-mail about it. You’ll then have, in all likelihood, a very, very limited window of opportunity to pre-order a system before they sell out.

We’ll have more information on the pre-order process as the PS5 gets closer to launch, but for the moment, your best bet is to sign up for notifications, then check your e-mail frequently.

Sony has announced that the PS5 will launch during the holiday 2020 season. This means it will likely come out within a few weeks of its competitor, the Xbox Series X. Anything past that, for the moment, is simply speculation. For context: The PS4 hit shelves on November 15, 2013.

As Sony confirmed before, DualSense will have haptic feedback and adaptive triggers, which will provide realistic, tactile rumble to simulate the feel of, say, driving through mud or firing a bow and arrow. The controller’s Share button has been replaced by a new Create button, which Sony says will provide even more ways to capture and share your favorite gameplay moments.

DualSense also has a built-in microphone, which will let you chat with friends without needing to dig your gaming headset out. The controller’s light bar now surrounds the touchpad, which lets you better see the glow emanating out of it and complements the white design nicely.

One of the biggest games announced at the PS5 June 11 event was Spider-Man: Miles Morales, which will launch alongside the PS5. This game will let you take control of Miles Morales as a newer, younger, less experienced Spider-Man, with all of Peter Parker’s powers and then some. We’ve seen very little of the game in action so far, but expect to learn more about it between now and its release date: holiday 2020.

Horizon II: Forbidden West is also another key PS5 title, following up on the 2017 hit Horizon: Zero Dawn. Other exclusives highlights include Gran Turismo 7 and Ratchet and Clank: Rift Apart. On the third-party front, you can look forward to big titles such as Godfall, Resident Evil Village and NBA 2K21.

We recently got a deep dive on PS5 gameplay, thanks to an Unreal Engine V demo entitled Lumen in the Land of Nanite. While this was just a tech demo, not an actual title slated to come out, it showed us how at least one developer will leverage the PS5’s powerful hardware for dynamic lighting and complex polygons.

Ubisoft has confirmed that some of its upcoming titles, including Watch Dogs Legion, Gods and Monsters, Rainbow Six Quarantine and Assassin’s Creed Valhalla will be on PS5, in addition to other consoles. People Can Fly’s multiplayer shooter Outriders will also be available on both next-gen systems. We’ll also be getting Fortnite, although that’s no great surprise.

Mark Cerny, a lead systems architect at Sony, hosted a talk on March 18 that walked users through some of the salient points of the PS5’s hardware. In particular, he discussed the PS5’s SSD configuration and 3D audio capabilities. We also learned about the system’s CPU, GPU and RAM structure.

The SSD is the PS5’s secret weapon, at least according to the Epic Games developers. The PS5 targets a load rate of 5.5 GB/s. In theory, that’s almost 10 times faster than the PS4. To be cost-effective, however, the PS5’s default hard drive will be only 825 GB, rather than a full 1 TB.

Epic Games is, in fact, so impressed with the PS5’s SSD that it’s had to rewrite parts of the Unreal Engine’s code. A developer claims that the SSD will enable more detailed and immersive environments, chock full of far more assets than previous consoles could render. The dev claims that the SSD will force other developers to rethink how they approach game design. It’s a bold claim, but we’ll see for ourselves during the PS5’s life cycle.

Cerny also discussed the PS5’s custom RDNA2 AMD GPU, and the physical construction of the PS5’s CPU. The short version is that the control unit (CU) on the PS5 is 62% larger than the PS4’s, largely due to the amount of transistors present. This means the PS5’s CPU will be able to route more processes, more efficiently.

The GPU will also make use of both ray tracing and primitive shaders, which will affect both power consumption and heat management. Unlike the PS4, on which power consumption can variously tremendously from game to game, the PS5 will try to standardize power consumption for each game and make resources available as needed. This should prevent overheating, as well as excessive fan noise.Advertisement

One of the most exciting —but also most technically demanding — aspects of the PS5 is its emphasis on 3D audio. Some PC headsets already feature 3D audio, but eventually, Cerny wants the PS5 to deliver 3D audio, regardless of platform: TV speakers, headset or soundbar. The key to 3D audio lies in Head Related Transfer Function, or HRTF. This feature maps out an individual’s hearing based on a sound’s frequency, direction and volume.

A Sony patent suggests that the PS5’s 3D audio may also be dynamic, to some degree. The patent describes a “dynamic AI audio” system that responds to player cues in order to gauge a player’s emotional state and adjust the music accordingly. This could be anything from changing a piece’s tempo, to using a different piece entirely. On the other hand, the PS5 isn’t mentioned specifically in the patent, so this could also be more of an experimental idea.

Sony revealed the PS5’s final design on June 11. The console will come in two styles: an asymmetrical PlayStation 5, and a symmetrical PlayStation 5 Digital Edition. The difference between the two is fairly obvious: The former has a disc drive, while the latter will play only digital games. As such, it’s likely that the PS5 Digital Edition will cost less, but it’s not clear how much the price break might be.

Beyond that, the design is a departure for PlayStation, which has launched with all-black consoles ever since the PS2. The PS5 is a two-tone black-and-white console with a vertical configuration and sloping white fins that cover a rounded black box. The Tom’s Guide staff has mixed opinions on whether this looks futuristic or ridiculous; no doubt, the Internet at large will debate the design until the console comes out, and perhaps even afterward.

We haven’t seen the PS5 interface in action yet, although a Reddit leak from a while back supposedly shows us what the PS5 dev kit’s menus look like. The interface in this leak is nearly identical to the PS4, although as many users have pointed out, that doesn’t necessarily indicate anything about the PS5’s menus. Dev kits often use what already works rather than what might look pretty in the future.

Furthermore, a Sony patent application filed in 2018 might tell us a little more about a new addition to the PS5’s interface. A “durational information platform” could use pop-up dialogue boxes to tell you how long any given level might take to complete, as well as whether doing so would conflict with any real-world obligations you have. The patent hasn’t been granted yet, so this might not be a launch feature, if Sony ever implements it at all.

The PS5 will be backwards compatible with most — but perhaps not all — PS4 games. Unlike the PS3, which essentially incorporated a PS2’s guts into early models, the PS5 will run older games via regularized software algorithms. In theory, this means that almost every PS4 game will be compatible with the PS5 right from the get-go. At launch, most of the PS4’s 100 most popular games will be playable.

How to Fix Chrome Flash Player When It Is Not Working

How to Fix Chrome Flash Player When It Is Not Working